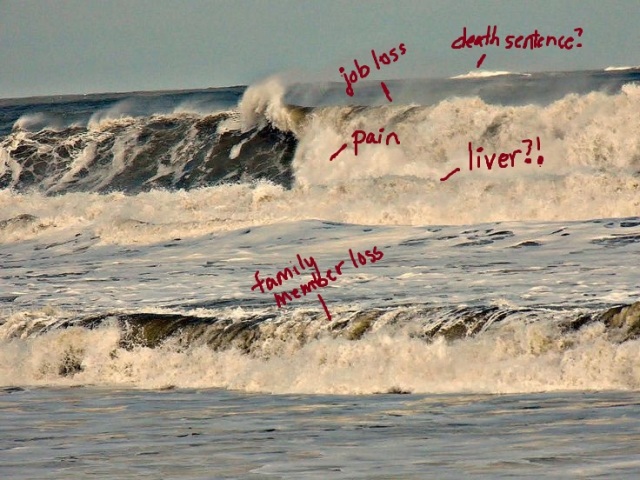 About 6 or 7 years ago, StarMan and I found ourselves surrounded in way-too-high waves off the Florida Space Coast, stupidly trapped in a rip-tide.  I knew that we were in trouble approximately 20 seconds before he did.  We had been in the water for at least 40 minutes, laughing and enjoying the bouncy waves.  We were unaware that with each playful wave jump, we were getting carried a few feet further from shore.  The waves were tall and irregular that day, a fact that was made abundantly clear only after we were wore out and ready to go back to our beach towels.  END_OF_DOCUMENT_TOKEN_TO_BE_REPLACED

(Let’s pretend that I got this one posted “on time” 2 weeks ago, ‘kay?) The vernal equinox, otherwise known as the first day of Spring (here north of the equator!), has meaning to me that goes beyond its astronomical significance.  March 21 is the day that the StarMan and I have long regarded as our anniversary date.  Going all mushy or TMI is not my style, but I really don’t give StarMan the credit he deserves. He is the embodiment of unconditional love, and I am the luckiest person alive to be the person with whom he decided to share his life.

END_OF_DOCUMENT_TOKEN_TO_BE_REPLACED

Today, I had an EMG test in my neurologist’s office.  Goal?  Figure out what the eff is wrong with my right arm. It was the most un-fun visit I’ve had with Dr. K.  Things started out innocently enough … the nice chatty lab tech hooked up some electrodes along my arm, touched my arm in several places with what looked like the end of the power cord for a washing machine, producing a slightly uncomfortable but decidedly purposeful twitch in various parts of my person (confined, mostly any way, to the general vicinity of my arm). StarMan came along, for entertainment purposes.  He said that the scene reminded him of this:

END_OF_DOCUMENT_TOKEN_TO_BE_REPLACED 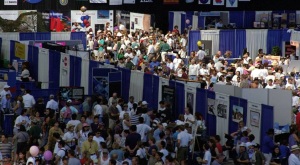 Last Saturday, my alarm went off at the very uncivilized hour of Oh-dark-early. The incessant screeching from my smartphone at 3AM was even more annoying than usual. Perhaps my having gone to bed past midnight had something to do with it? With considerable effort, I pushed myself out of bed, splashed some cold water on my face in hopes of reviving myself to an acceptable level of consciousness, chugged a cup of coffee for good measure, then quickly grabbed a fistful of nails, a hammer, and got busy. Today demanded multi-tasking by a jack-of-all-trades, in record time. There was no time for self-pity by the sleep-deprived! END_OF_DOCUMENT_TOKEN_TO_BE_REPLACED

Just a quick check-in to summarize my latest (and final!) cardiologist visit a few weeks ago.  You may recall that in a fit of being uber-thorough, my cardiologist suggested that I do an echo-stress test.  Did the test uncover an underlying reason for my weak arm, and the bike incident? END_OF_DOCUMENT_TOKEN_TO_BE_REPLACED

An example of a 2-body problem: Two objects with the same weight (mass), orbiting around a point in space (credit: http://en.wikipedia.org/wiki/Two-body_problem)

Amongst the colleagues in my profession, the phrase “Two-Body Problem” is a geeky way to describe the challenging situation that a married (or committed) professional couple finds themselves in, when  they are looking for jobs in similar research fields in the same geographic location, in hopes of sustaining their careers and keeping their relationship intact.  StarMan and I are, by all accounts, a strongly-coupled  Two Body Problem, and we just got news today that dashed some high hopes. END_OF_DOCUMENT_TOKEN_TO_BE_REPLACED

The dreadful, shocking news I received at the cardiologist’s office on Monday morning left me a sobbing mess for most of the day.  As you may recall from my last post, I recently visited my Primary Care physician to get his take on the problems I experienced during a recent bike ride.  After a thorough checkup, he referred me to the cardiologist, and stressed that I needed to set up a follow-up appointment to see him immediately after the referral visit.   I remember thanking him and saying “good bye, see you again soon” and, at that moment, putting my finger on one of his attributes that I found so refreshingly  quaint:  he was dressed in one of those zip-off hiking pants/shorts and was wearing a casual polo shirt.  I’ve seen plenty of pretentious doctors  during my life; he was the first doctor who actually listened to me, who was humble almost to a fault.  Thoughts of him stir visions of an old-fashioned doctor in a Normal Rockwell painting, although “youthful and in-touch” would represent his persona just as accurately.  I would have never guessed that this “good-bye” would be the very last. END_OF_DOCUMENT_TOKEN_TO_BE_REPLACED

I’ve learned 2 things this week:  (1) There is something wrong with my right arm and hand, and (2) I can be surprisingly ambidextrous when the situation demands (evidence: see sad hand below).   The problem — a brand new one — came on very suddenly about 3 weeks ago.  I suddenly started having serious pain in my arm, the area between my wrist and my elbow.  The pain was a deep-down throbbing kind of pain, which I would feel most strongly at night.    In the morning, that pain would shift position and concentrate in, of all places, the back of my hand.  My arm was also as weak as a kitten. Then for a couple of days, all seemed OK again.  And now, things are back to being not OK.

END_OF_DOCUMENT_TOKEN_TO_BE_REPLACED

Check out my blog’s fresh new look!  Do you like it?  Frankly, I’m digging the cleaner (and more astronomical-looking) look.

END_OF_DOCUMENT_TOKEN_TO_BE_REPLACED

The house has risen! And in last 2 nights since the foundation repair crew left, the house sure had a lot to say about the “abuse” it had received.  The otherwise quiet nights were filled with grumbling sounds (usually StarMan is the source of those noises), pops and crackles.  Sounded like the whole gosh-darned thing was going to fall down.

END_OF_DOCUMENT_TOKEN_TO_BE_REPLACED

I am a professional observational astronomer, employed by a U.S. federal agency that supports (among other things), science. Somewhat at odds with this career path is the fact that I may be losing my vision due to a neurological condition. My blog is a hot mess of seemingly random topics that include my ongoing medical diagnosis "journey", behind-the-scenes of government-led science, non-work adventures, and the occasional side-dish of astronomy mini-lessons.